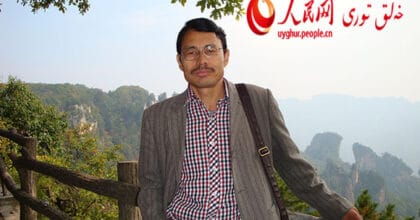 Uyghur Writer Abbas Muniyaz Turkiqan was born in 1966 in Aksu City. In 1986 He graduated from Hotan Teachers College, Language-literature, and worked at Aksu City No 1 middle school. From 1992 to 1994 he studied at Xinjiang university and obtained a bachelor’s degree in Uyghur Language-literature. He worked at Aksu No 1 middle school until July 2014 and was an advanced teacher, a department head of the Language and Literature department, a member of the Education research department, and a vice president of the Aksu City writer association. In 1985 his story, ‘Responsibility’ was published in ‘New Jade’ journal. Since then, he wrote more than 10 novels such as, ‘Country of Miracle’, ‘Sleepover Nights’, ‘Eyes of the Mercy’, ‘Hives of Summer’, ‘Baby with beards’, and ‘The trusted One’. He also wrote more than 100 novels, such as, ‘Please Be Satisfied Raziya’ ‘Handyman’, ‘the man make oils in a traditional way’, ‘Sweet Dream’, ‘This side of the Stone Bridge’, ‘Football’, ‘Evil habit’, ‘Eye notes’, … He has had more than 30 pieces of Criticism and essays, such as, ‘Alcoholic’, ‘Mother’s Love’, ‘Three women and one clothes’, … He also translate stories from the Chinese Language. Moreover, he translated more than 15 articles and published in East Turkistan numerous journals and also more than 10 books, such as, ‘My wife is a writer’, ‘The View behind The Window’, and ‘Please save our mind’. He also collects and creates ‘the middle school Uyghur Language and Literature review handbook’, novels, ‘The Last Hunt’, ‘The Thinkfull Mind’, ‘Please Be Satisfied Raziya’, and novels collections of ‘Untwistable Twister’, ‘The feminine universe’, novels ‘Baby with Mustaches’.

His many writings translated into Chinese, such as novels ‘The Last Hunting’, ‘Sweet Dreams’, ‘The Song at Night’, ‘Magical Ice Mountain’, ‘Unfound Tomb’, ‘Evil morning sickness’, ‘White Sparrow’, ‘Betrayal’, ‘Get out of myself’, ‘Stone’, ‘Blond Hair’. He also has some writings translated into Kyrgyz Languages. Those writings are, ‘The sun seen in the Angle of the Street’, ‘Fate’, ‘Sleep Overs Nights’, and ‘Seven Girls’. His few writings were published in elementary schools, high schools, and colleges textbooks, such as, ‘Eyes of the Mercy’, ‘Forever Questions’, and ‘Magical Ice-Mountain’. His novel, ‘Be Satisfied Raziya’ got ‘The Fourth HanTangri award’ and his Novel, ‘The Last Hunting’ Awarded as a great writing by the Literature and Cultural Association of East Turkistan so-called Xinjiang, also awarded a ‘Tarim Literature award’. His novel, ‘The eyes of Mercy’ was awarded “best writing” that published in the ‘Tarim’ journal for 50 years by the Literature and Cultural Association of East Turkistan so called Xinjiang. In addition, his 8 writing was awarded best of the best in East Turkistan ‘the so-called Xinjiang’ and he got ‘The Golden Wedding‘ award and ‘The dedicated writer’ award. In January 2011, His many writings were awarded the ‘Xinjiang youth writer award’ … His writings have had a lot of awards. Very famous Uyghur writers wrote about Abbas Muniyaz Turkiqan that how he wrote wonderful novels, and how he studies, researched, communicated, and connected to the nature of the writing. He is the most loved Uyghur writer and gets everyone’s admiral. Unfortunately, Abbas Muniyaz got arrested because of his writings and was sentenced to 12 years in 2019 by the Chinese government.

Some of his books: 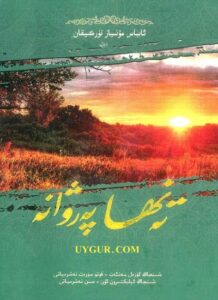 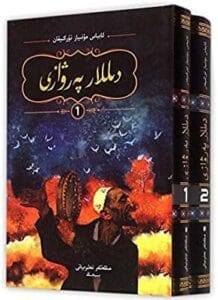